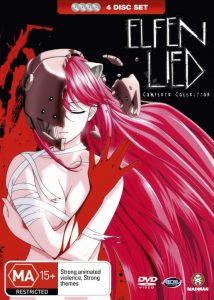 “The Diclonius (two-horned human) are mutants created by humans. It has a special ability that can be described as a sixth sense. These mutants have enough power to exterminate the whole human race. Afraid of their powers, people isolate them in research labs to be studied.

One Diclonius girl, Lucy, breaks out of confinement, kills her guards and escapes. She fell into the ocean after being shot and ends up on a beach. There, she meets Kota and Yuka. They name her Nyu and begin to live with her.”

In my opinion I though this was a quite good anime, the overall story, the art/graphic work and the characters. The overall story flowed from one episode to the next and the character development slowly developed through each episode. I guess this is why I got stuck watching the all of the episodes because I wanted to know what would happen next. The character, well actually characters I liked the most was the Lucy/Nyu split personality. Lucy seemed to have a bit of a dark side until towards the end

The Nyu side was kind of cute in her ways though she could really speak any basic words except “Nyu” but you can usually tell what she means or how she felt when she spoke “Nyu”.

The Dislikes of this anime:

To tell you the truth, I really don’t have any dislikes of this anime. It was a very enjoyable anime to watch and I would recommend this to anyone.

The only thing I really didn’t like was how the series had ended in episode 13 and I kind of wish there was a 2nd season or something. Even the OVA didn’t help with the ending, just a little addition to some of the episodes towards the end of the series.

I will probably post a further review of this anime in the near future.