Hello everyone RuKun here once again with another #SlayDragonsSaveCats. In my last post I had stated the #SlayDragonsSaveCats event had ended. Which is hasn’t, we are still doing the kill 5 dragons and ESO will donate 1 per 5 to Best Friend’s Animal Society and Four Paws. So I haven’t been posting screen shot everyday like I was before but I thought it was over. Anyways, so I will post one screenshot which is the one I posted on ESO’s Facebook and twitter page where they want a fav screenshots of our in-game pets. If you would like to see all my screenshots click this link: https://urle.io/rukunsteamscreenshots

Here is my screenshot of my pet after a dragon kill yesterday: 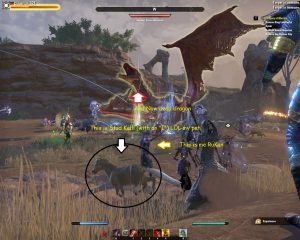 So it’s still going on I believe. I will be getting in my 5 dragon kills after I get off work today. I have been get 5 dragons everyday since as they still had event tickets going on too, then Elder Scrolls Online announced the donation thing was still going on. $56910 RAISED thus far for the animal charities