Hello everyone, Rukun here. How is everyone doing? I’m good for the most part just at times the stupid in the world gets to be too much so I’m thinking that maybe writing more articles about this as most good people don’t act this way and I makes me want to rage. So in a sense this might easy those emotions and I will first say that I truly hate writing about people like this just as I hate having to write about scammers or other shitty stuff that happens in the world but maybe I see it has hopefully showing people of how not to act. But not likely from my current perspective. Anyways, as we are all in the same situation as far as the Covid19 pandemic people’s true colors come out in the worst of it. Now I am an essential worker and also a high risk person for Covid19 as I have asthma. Well also back issues and more recently pain in my knee but that might not be as much of an issue as asthma. Now lot of people who are given a choice not to wear a mask do so and put other at risk if they are carrying Covid19 without knowing it. Trump Supporters are the worse.

Anyways, someone shared an article about someone named Ashley Smith who tries to start a stupid ass challenge called Burn Your Mask /#IgniteFreedom just because they don’t want to wear a mask. The article: https://god.dailydot.com/burn-your-mask-challenge/ that inspired me to write this shitty thing but still comes from the fucking heart. As I the owner of this site and stand for life #betterhumansbureau, #BetterHumansSociety. People like this person are the most selfish human being on the planet and just a little bit of my own digging the people don’t seem to be one to deal with. They do own a business as well, just saying. The business is called Blue Ridge Merchants. The reason I know this information is due to the fact that the video is also posted on the Facebook page: https://www.facebook.com/watch/?t=184&v=265612914868457 which is from a page called ReopenNC (NC is North Carolina for those living outside the US). There they have a domain to a website for their page: https://reopenncnow.com/ where they are even using kids to promote their a beliefs. See this edited screenshot below. 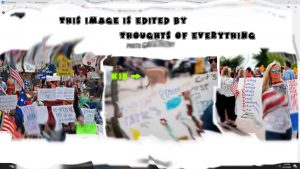 I have an un-edit screenshot available in anyone wants to question the above image. Anyways, after I looked into who owns the domain name through Domain tools the Registrant Organization says Blue Ridge merchants see here: https://whois.domaintools.com/reopenncnow.com and there is also a domain for the business as well here: https://whois.domaintools.com/blueridge-merchants.com. Now, they don’t have that great of Google business reviews either one person even states:

“Has a tendency to push his political opinions on folks:” stated by Andrew S google reviews

Anther one stating something about “dangerous people to do business with” but either way this not a business I would support as any business that would want to risk lives of the all for the select few are not the ideas I think make good people. With the statement about political views I find common among Trump supporters from my own experience. Not saying these guys are as I haven’t cared enough to dig any further into these people or business/brand. But I really don’t think wasting masks and other such BBE to prove to your point is s damned selfish thing to do and I think hospital and other such place who have restriction on how my PPE we are are allowed to use in a day. Personally I would like to say fuck you to ReopenNC now and Blueridge Merchants as these people don’t truly care about life or those around them by only thinking about their selves.  Anyways, as we here at Thoughts Of Everything always stand for all peoples. Thanks you for reading. Don’t for get to sign up on Thoughts Of Everything so you can comment on our post and join in on our member only community. If you would like to support us we accept donations and you get lifetime upgraded account and other benefits including discounts from my business. Thanks again for reading.