This is my first attempt at a AMV (anime music video). I made this video with Nero Vision. I used the second episode for this video, I believe towards the end of the episode. The music that I had used was one of my tracks called “The Golden Rules”. Anyways let me know what you think.

I was basically trying to make a video that synchronized like this following Eureka Seven video to the Lord Of Trance track by Dj Tiesto
Due to Copyright grounds both of the above videos are blocked. The one I made is blacked in most countries though I’m not sure which countries either. I will at least try and get my video fixed. The other one I have no control over as I didn’t make it.

I first posted this on my blog here: https://ru-kunsanimediscussions.blogspot.com/2008/10/ergo-proxy-amv.html

If you like this video, post or my music as I offer all my music for free please donate here: https://www.gofundme.com/f/rust-of-all-tradesrutakus

A couple of InuYasha Desktop Themes

Here are a couple of InuYasha desktop themes. I’ve actually had these themes for a while. I must say that I think they are pretty well done and very easy for someone to install.

Anyways, I hope you enjoy these two desktop theme. I will post more later.

I first posted this post on my blog here: https://ru-kunsanimediscussions.blogspot.com/2008/10/couple-of-inuyasha-desktop-themes.html

There is too much going on lately. I’ve just been busy and such, actually haven’t had the time to really watch anime everyday like I normally do. But still make sure that I feed my anime needs, lol. Anyways, I’m still a little irritated with the Saturday lineup on [adult swim], but it fine I guess because I’ll just record Code Geass and Moribito so I don’t miss anymore episodes. But I still have to figure which episodes I have already missed due this schedule chance.

Other updates, I’m just about finished watching Ergo Proxy, I think I watched up to episode 21. I have also started watching Hell Girl which is being shown on the IFC channel (Independent Films Channel). I like watching anime on that channel because it not edit like it is on adult swim or the Sci-Fi channel. I would actually like to see more anime on IFC in the future.

Last piece of this update is that my birthday is coming up on the 28th of October. So I hope that I get something good for my birthday present. I would like to get a box set of Elfen Lied or another series. Or even something along that lines of music production hardware/software since I compose/produce electronic music with my computer.

Well that’s it for now.

Oh BTW I should have my review of Twilight of the Dark Master up here in a couple days and possible I will add more to my reviews of Elfen Lied and True Tears. 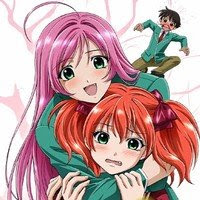