Here is the post I will be discussing the various things like tips and suggestions for successfully completing PTSUs (paid-to-sign ups) on the various PTC/GPT sites. Paid-to-sign-ups (also known as registration ads or something similar) are a great way to make your minimum payout a lot faster then just clicking away at ads or reading ads. But to be able to get credit for one of these you need to meet the minimum requirements ser forth by the ones who posted the PTSU advertisement. Sometimes in my opinion the requirements are a bit vague or confusing, well maybe for some. Anyways, here in the following I discuss some common suggestions and tips that I have gathered from my experience in completing PTSUs.

The first most important thing to do is first read the direction set forth by the site you are completing the PTSU on. The reason being that there are sometimes rules—whether they be in the web sites’ terms of use or under the list of PTSU advertisements themselves—that are required by the web site in order for the PTSU to be valid. An example rule could be like the ones that are on most Aurora script PTC web sites, “Must click 30+ ads to receive credit”. But anyways the best thing I can offer for you to complete paid to sign up offers is to follow the rules, and be active in the offer you had signed up under. The reason is that people pay good money for these sign up and expect to gain active referrals from that sign.

To Be continued in the near future

This post was first poste by Rukun on his old blog here: https://mrrustexd.blogspot.com/2008/07/ptsu-tips-suggestions-part-1.html

This post is no longer being updated due to the fact that Prowling Panther has disappeared which kind of sucks, because I kind of liked the site. But anyways it’s to be expected when trying to earning from the Internet. Anyway, topic title will be left as is. But payment proofs are removed from this post as well as the link to the site. Sorry folks.

This post was posted on Rukun’s old blog here: https://mrrustexd.blogspot.com/2008/07/prowling-panther-3-payment-proofs.html

Again with the Updates v.1.4

Well what heck again with the update post here. What is my problem LOL. Well anyways there isn’t to much new lately. I just started watching Zero No Tsukaima. I’m on the third episode. So far I have enjoyed the first two episodes so I’m going to continue watch the rest of this first season. I will post more about that a bit later.

Again I slack off, I haven’t gotten any further in the School Rumble manga so I can’t really talk about that.

So what should I talk about. Maybe some cute anime girlies dancing around with dangerous sharp objects. LOL Well maybe another time 😀

I guess I could say that I tried watching Twilight of the Dark Master again last night so I could write a review for this blog. But I started to fall asleep in front of my TV while I was watching it. I guess I will have to try this again either tonight or tomorrow. I guess that say a review for Twilight of the Dark Master is coming up here sometime soon.

So what do you all want me to talk about???

Thank you guys for reading as it what keep this site going.

This was first posted on my very first blog here: https://ru-kunsanimediscussions.blogspot.com/2008/07/again-with-updates-v14.html

Well I just finished watching Le Chevalier d’Eon and I must say that I really enjoyed this series. The ending is quite surprising. But I’m not going to spoil it for you all. Look for the review for it here in the near future. But all I’m going to say for the moment is that Le Chevalier d’Eon’s story is quite different compared to most other animes that fall under this type of anime genre. I’m also just about finished watching Rosario + Vampire I think I’m up to episode 10.

Finally I just started reading the School Rumble manga. This is that first time in a long while that I have attempt to start read a manga. But I’m also slowly but sure reading the Bleach manga but not as focused on it.

Ok here is a video for you all

I first posted this post on my first blog here: https://ru-kunsanimediscussions.blogspot.com/2008/07/more-updates-and-random-stuff-v-13.html

Updates (I’m such a Slacker..XD)

Well everyone, I’ve been pretty much slacking off on this blog since the day of its creation. But I will try as much as possible to make at least three posts a month, hopeful more. Well, nothing is too much new, still in the search for a job.

So I had posted a anime review a little bit back for True Tears (TV), hope you all give it a read. I have decided to add to my reviews I post at a later date just to give it more of a detailed review. But I still haven’t decided on the format I would like to follow.

Plus I have been somewhat working on some kind of script implementation that I would like to use in my blog to hide spoilers that I may post here from time to time. I still trying to figure it out though. But I hope that I could implement this sometime soon.

Also I ‘m also planning on making a few post about mangas and what not. But I really haven’t read as many mangas and much as I have watched anime. So my manga post will probably be few, as least until I start reading more and what not.

well thanks for reading.. XD

I first posted this on my blog here: https://ru-kunsanimediscussions.blogspot.com/2008/07/updates-im-such-slackerxd.html 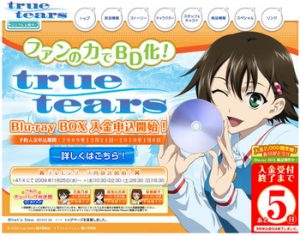 “Shinichiro is a student living in what would be a dream come true for most high school boys, but for him is mostly a frustration. A well liked girl in school named Hiromi has lived in his house for a year along with his family. Her father was a close friend of the family, and when he died they immediately took her in. She is popular and well liked, always smiles, is talented in sports- but Shinichiro knows there must be tears inside her. Having an artistic tendency, he makes watercolours of her and thinks about wishing to ease her tears. Yet he cannot bring up the nerve to talk to her even in his own home. She, too, is quiet and withdrawn in their house, quite unlike at school. Shinichiro is also distracted by teasing from his friend Nobuse for watching Hiromi from afar, a curse of bad luck from a strange girl named Noe, and being forced to perform Muhiga dancing. By helping Noe he hopes to ease his own problems, yet he seems to have difficulty helping himself.” Source: Anime News Network

I had found this anime to be quite enjoyable as with most animes of this type of genre. The animation was great and I felt that the attention to detail was really well done. Throughout each episode there was a good amount of every type of feeling. What I mean by this is that the emotions the characters were feeling I would start to feel their emotions. In fact a couple times I almost wanted to cry. Another thing I like and enjoyed with this anime is that I felt the entire story flowed from one episode to the next. Sometimes (just like other enjoyable animes) I would get irritated or impatient after an episode because of the fact that the episode would end right in the middle of a really good part. Then I would have to wait to watch the next episode.

The dislikes of this anime:

I must say that there really isn’t too much that I didn’t likes about this anime. There may have been a few parts that I found to be irritating but that really doesn’t mean I disliked them. In actuality I felt that the anime ended too soon, at least in my opinion. I think that there could have been a bit more to the ending that how it ended in episode 13. But I won’t good in to detail on that just because I think you should watch this series and see for yourselves.

I will probably post an additional review for this anime in the near future with a bit more. For example I think will add different categories pertaining to my rating in graphics/animation, story, fun factor, and originality. But this may differ, because I really haven’t decided yet on how to go about it.

Here is another teaser True Tears image for you all…XD 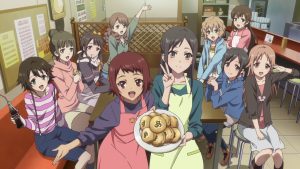 Sorry I can’t remember where I had found these images but I had found them somewhere on the Internet so I don’t own any of the above images. They’re just for promotional use

I first posted this blog post on my old blog here: https://ru-kunsanimediscussions.blogspot.com/2008/07/true-tears-tv-review.html