Well, it seems that Adult Swim has again changed Saturday’s line up. This time it seems to be a much better line up then the previous one mentioned in an earlier post of mine. This mean that there is more anime and Code Geass and Moribito are on at a earlier time. I’m sure that it will probably change again, but I must say I’m happy with having more anime to watch on Saturdays.
So at the moment this is the line up: (anime in orange color)
1. Robot Chicken [2 showings] 2. Aqua Teen Hunger Force [2 showings] 3. Boondocks [2 showings] 4. Bleach
5. Moribito
6. Code Geass R2
7. Shin Chan
8. FLCL
9. Death Note
10. Ghost in the Shell
11. Cowboy Bebop
12. Big O
13. InuYasha
Source
[adult swim]

Well now it’s a new month. So I hope that you all had a Happy Halloween and stuff. It seems I still slacking off on some anime reviews, hopeful I get one or two done this month. I’ve just been kind of busy. Anyways, well I had a pretty good birthday, had some Korean food for my b-day dinner, mmmmm good. Now I’m waiting to see if I will get my Elfen Lied box set that I had asked for. This will be my first box set. Nothing too much else going on. I started watching Someday Dreamers, which isn’t too bad so far. I also am giving Soul Eater a look as well. I’m still watching Bleach, frist season of Code Geass and Moribito, slowly but surely. I finish the second season of Zero no Tsukaima and started the third season. There are a few other animes I have watched from DVD rented from Blockbuster Total access. But I don’t like the selection of anime blockbuster has. Anyways, that’s about it for the moment. Thanks for reading. 😀

There is too much going on lately. I’ve just been busy and such, actually haven’t had the time to really watch anime everyday like I normally do. But still make sure that I feed my anime needs, lol. Anyways, I’m still a little irritated with the Saturday lineup on [adult swim], but it fine I guess because I’ll just record Code Geass and Moribito so I don’t miss anymore episodes. But I still have to figure which episodes I have already missed due this schedule chance.

Other updates, I’m just about finished watching Ergo Proxy, I think I watched up to episode 21. I have also started watching Hell Girl which is being shown on the IFC channel (Independent Films Channel). I like watching anime on that channel because it not edit like it is on adult swim or the Sci-Fi channel. I would actually like to see more anime on IFC in the future.

Last piece of this update is that my birthday is coming up on the 28th of October. So I hope that I get something good for my birthday present. I would like to get a box set of Elfen Lied or another series. Or even something along that lines of music production hardware/software since I compose/produce electronic music with my computer.

Well that’s it for now.

Oh BTW I should have my review of Twilight of the Dark Master up here in a couple days and possible I will add more to my reviews of Elfen Lied and True Tears.

well I must say that as of the recent Saturday I noticed that I didn’t get to watch the next episodes of Code Geass and Moribito. *kicks some rocks* At first I though this was just temporary schedule and since I don’t log in to the adult swim forums as much because I’ve been really busy. But anyways, I just found out on some sites on the Internet the adult swim pulled the crap of moving Moribito and Code Geass to the 5:00AM-5:30AM slots. And since I’m usually not up at this time to watch them I have to miss them. It’s bad enough that anime isn’t shown as much on [as], but can deal with that because I have other animes I watch that there is no way in hell adult swim would even play them. But Saturday’s action (anime) show is what I always looked forward to even though the shows are English dubbed—I prefer English subs with Japanese audio.

Anyways, I will post more about this later. Here is the discussion in the adult swim forums: New Saturday Schedule Discussion

Thank you for reading

This post was first posted on my first blog here: https://ru-kunsanimediscussions.blogspot.com/2008/09/angered-with-adult-swims-saturday.html 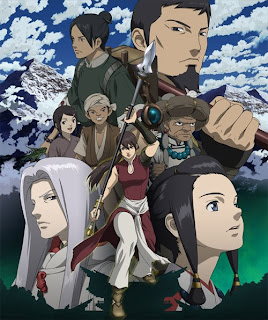 Well I had watched the first episode that aired on adult swim. I must say that this seems like its going to be a good anime. The animation and story line is catching which is what I like about most with most of the adventure types of animes that I watch. At first it had seem to start out kind of slow but then it started to get interesting. Anyways, I think I my just continue follow this series and watch it every Saturday on adult swim just as I have been following Bleach and Code Geass.
I will post more later after I get further into the series.

Thank you very much for reading. This post was first posted on my first blog here: https://ru-kunsanimediscussions.blogspot.com/2008/08/episode-1-first-impressions-moribito.html

Here is a list of all the animes that I currently watching and following. This list isn’t in any given order and once I finish watching them I will move them to my watched &amp; Completed list I will update this list every so often.

I first posted this post on my old anime blog here: https://ru-kunsanimediscussions.blogspot.com/2008/05/animes-im-currently-watching-following.html